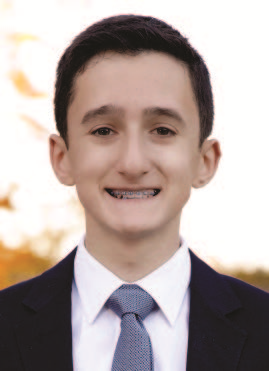 YOUTH OF THE YEAR
Josh Liswood

Josh Liswood is a junior at Roslyn High School.  Judaism and Temple Beth Sholom have always been important to Josh.  His Temple Beth Sholom career began in kindergarten when he entered Temple Beth Sholom Religious School. He loved learning to read Hebrew and gaining a greater understanding of the holidays.  After graduating from religious school at the end of seventh grade, Josh attended Makom and volunteered as a madrichim (teaching assistant), with first graders on Sunday mornings. He very much enjoys these volunteering sessions and has continued for the past four years.  For his bar mitzvah project, he interviewed Irving Roth, a prominent Holocaust survivor, as part of the Adopt a Survivor Program. Over the course of eight sessions, Josh gained firsthand insight about the Holocaust that he will always remember.

At school, Josh pursues clubs, sports, and academics.  He is vice president of the Medical Explorers Club, a school organization dedicated to educating members about various diseases and raising money for childhood cancer.  He is also a fencer on the Varsity Fencing Team, competing in the epee category.  He took up the sport for the first-time last year and really enjoys it.  He is a member of the National Honor Society and the World Language Honor Society.

Music is also an important part of Josh’s life.  Previously as a manager and now as secretary of social media in the Roslyn High School Marching Bulldogs, Josh has extensive commitments to the high school marching band.  He plays the clarinet as part of the wind section, and previously performed in the pit.  The band enters numerous competitions each year and attained first place at states in Syracuse two years ago.  He has traveled to Disney World with the band and marched in parades through Epcot and the Magic Kingdom.  Josh also performs in the Symphonic Band and Wind Ensemble at school and has excelled in individual music competitions.

In the summer, Josh attended sleep away camp in Maine at Camp Modin, the oldest Jewish camp in New England, where he established friendships with fellow conservative Jewish campers from around the world. In more recent summers, he participated in the Explo summer academic program in which he sampled classes in numerous subjects while living on college campuses at Wellesley and Yale.  He also traveled throughout California on a teen tour, during which he volunteered at a soup kitchen to help those less fortunate.

Family is very both important to Josh.  He is a wonderful son, brother, grandson and cousin. Along with his parents and sister, he enjoys hosting the Jewish holiday meals at his home and maintains strong connections with his relatives. Several years ago, Josh traveled to Israel on a multi-generation trip with his grandparents, parents, and cousins to learn more about his Jewish heritage.

For the past four years, Josh has read the first Aliyah on day one of Rosh Hashanah at Temple Beth Sholom services, and occasionally puts on tefillin with his dad at morning minyan. Josh is an avid Jets fan and enjoys watching NFL games.  He also enjoys playing fantasy sports, as well as real sports with his friends. He is very honored to receive this award. Support Josh Liswood by placing an ad in his honor.