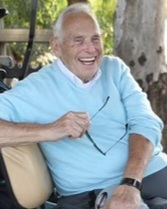 Irwin married Janet in 1958 and have produced three children, thirteen grandchildren and five great grandchildren. Irwin is an insurance and financial planner and has held this position for many years.

His involvement and participation in synagogue life commenced in l970 with membership originally in Marathon Jewish Center which eventually became Little Neck Jewish Center and now is Congregation L’Dor V’Dor – Oakland Little Neck Jewish Center. His activities ran the gamut of being President of the various Clubs as well as promoting membership and being Ambassador of Good Will throughout his tenure. His extraordinary efforts in keeping these organizations viable and vibrant have led to this day when he is recognized and respected by his peers as Regional Man of the Year.

More to the point his dedication and exemplary involvement in Jewish life includes American Friends of Neve Hanna, a loving home for children from distressed and dysfunctional family circumstances in the south of Israel. To his credit the New York Metro Region, FJMC, donates to this worthy cause. Irwin and Janet now spend six months in Israel and six months in the United States.

These accomplishments have been widely recognized throughout the Jewish world and we are grateful and ever so pleased that his name is also associated with the Federation of Jewish Men’s Clubs.

Support Irwin Tobin by placing an ad in his honor.